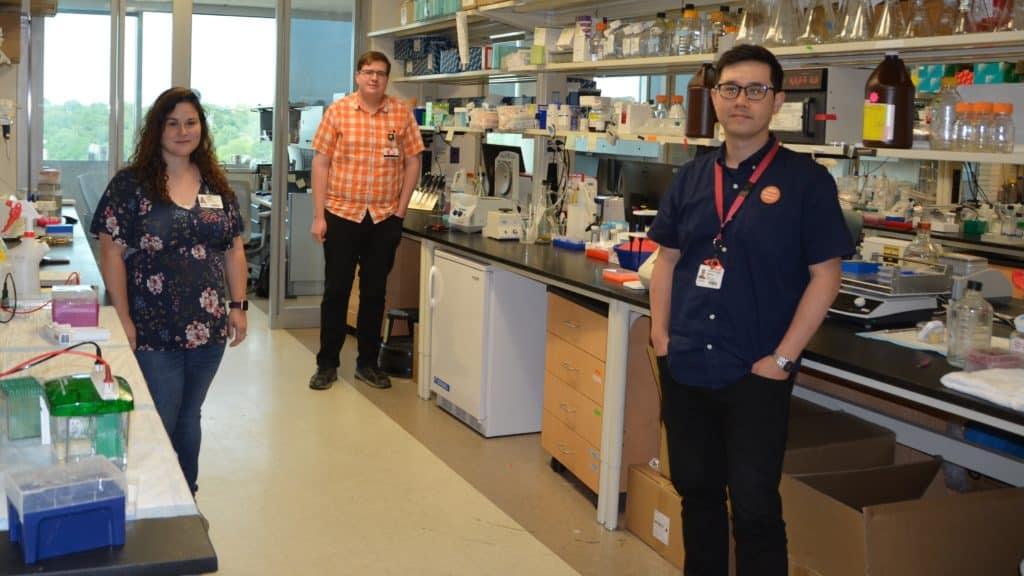 June 3, 2020 | LITTLE ROCK — A research team led by cancer researcher Justin Leung, Ph.D., at the University of Arkansas for Medical Sciences (UAMS) has uncovered the role of the protein RNF168 in DNA damage repair and shown how mutations of the protein affect people with a rare genetic condition.

The study titled “Histone H2A variants alpha1-extension helix directs RNF168-mediated ubiquitination” was published in the May 18 issue of the open-access journal Nature Communications.

“Every day our cells are subjected to environmental sources of DNA damage, such as ultraviolet radiation and toxic chemical exposure. If left unrepaired, these damages can accumulate, leaving mutations in our DNA and ultimately cause cells to become cancerous,” said Leung, assistant professor in the UAMS College of Medicine Department of Radiation Oncology.

In most cases, this damage is detected and repaired by a tightly regulated method involving many proteins. To develop better cancer therapies, researchers such as Leung strive to understand the regulation of DNA damage and repair by sensitizing cells to radiation therapy and chemotherapy drugs that target DNA.

“Our lab studies the repair of double stranded breaks, where both strands of DNA are broken apart completely. When a double strand break occurs, a cascade of protein activity is set off to try to resolve the damage,” Leung said.

Mutations in one of these proteins, RNF168, have been found in patients with RIDDLE syndrome, a rare genetic disorder that increases a person’s predisposition to blood cancer and is characterized by several attributes:

RNF168 adds a small signaling molecule called ubiquitin onto a subunit of chromatin, where we store our genetic information. The ubiquitin signal brings repair proteins to DNA double strand breaks. However, exactly how RNF168 recognizes the specific target remains unclear.

Using molecular and structural analysis methods, Leung’s team uncovered crucial components of RNF168 and chromatin required for the implementation of repair pathways in response to DNA damage. Their findings suggest that a recognition between RNF168 and chromatin is required to activate the downstream DNA repair processes.